Inspired by the Steelband Music of Trinidad.
​

"Ms Sten's work gives us the viewers some of that undefinable beauty that is sound. She very cleverly works with color and nuance so deftly, that the strokes of her brush resonate.
I would dare anyone not to spot sound through her canvasses".
​
​Adele Todd. From a review of "Drums of Heaven" Gallery 1234 . Trinidad , 1996.
"Pan" is the popular name for the steeldrum, for the music played on it and for the whole scene that goes with it.
Pan is not a folk instrument, but a modern Trinidadian invention, which has developed from a basic three-note oil drum in the 1940s  to todays sophisticated instruments which are used to play complex 'Panorama' tunes, jazz, folk-,  pop- and classical music, all with ecstatic perfection.
​
"For those who know nothing of our Pan and our Mas, Ms Sten gives the viewer the sight and the sound, the toil and the triumph of every aspect of the mediums. For those who are part of the event in its many ways, she gives us a record of those undefinable things, that we cannot quite put into words, but we love so very much... She has managed to successfully and intelligently create what we cannot see, yet so clearly know and feel.'
Adele Todd. From review of "Drums of Heaven" Gallery 1234 . Trinidad , 1996.

‘Fire from Within’ is one of my   tributes to the “ Trinity of Pan” : ‘Desperados’ ‘Renegades’ and ‘All Stars’ the major steel bands from ‘behind the bridge “ in East Port of Spain, Trinidad. I painted this while listening to  ‘Desper's’  Panorama rendition of  Lord Kitchener's “Pan in  A  Minor”.
‘Despers ‘  music is fiery and sweetly passionate, punctuated by turbulent passages of violent expression, but always returning to a  harmonious and joyous whole.
It is an iconic painting, which has developed its own following, as its many layers of meaning are open to personal interpretations.

“Fire from Within’ ‘, was  exhibited in my solo shows at the 'Aquarela Gallery' ,  the '1234  Gallery' in Trinidad   and at the' Art Foundry'  in Barbados as well as in  '10 Significant Painters' at  The Art Foundry West in Barbados.
​It is featured in “What kind of Mirror Image- a History of Art in Barbados” and appears on the cover of  “From Nation to Diaspora”  by  C.Forbes. UWI, Jamaica.
​Price upon request: lilian.sten@gmail.com

The other two paintings in this  'Trinity' are:

"The power and the Glory – All Stars” Private Collection. Barbados 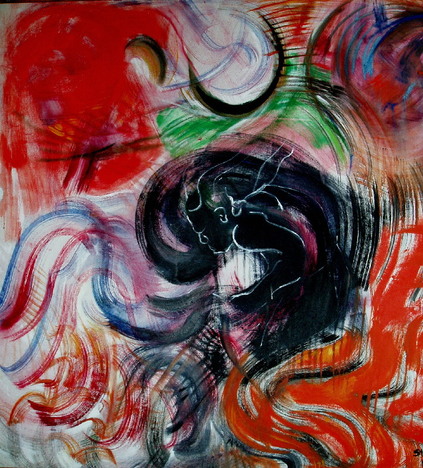 
Night in the Pan Yard.

Practice done, all, but one man, have packed up and gone home. Light from the street lamps filters through the racks, it is a dark-moon, Carnival Friday  night.

The man bends over his tenor-pan and plays, oblivious to all but his music; it is he, his pan and all the angels in heaven rejoicing to the sweetness and purity of each note.
​ And yet, there is a sadness, a longing in that music.
“How can we sing King Alpha Song in a strange          land…..”
​

This is a Jouver't painting. Jouver't is a Carnival Monday morning celebration and my favorite time of the year. It starts in the darkest hours before dawn, fills the streets with angels and devils, mud and paint, rum and music and roiling humanity. As dawn breaks the music rises to the heavens to greet the new day.
"Let There Be Light!"  captures that brief, magical, moment before sunrise ,when the sky lights up, but darkness still reigns in the street.

Renegades Steel Orchestra , performs in concert halls and  music festivals worldwide, but returns home to compete in Panorama and the Carnival street parades. Theirs is a powerful, disciplined and passionate sound, seasoned with a good portion of humor and irreverence.

Renegade's Jouver't Morning on the road, 2014
'Pan Fadah'.
​
I was working on a series of paintings for “Drums of Heaven”,
an  exhibition to be held at the '1234' Gallery in Port of Spain,Trinidad.

As sometimes happens: I was staring at a blank canvas and it stared back at me - for much too long.
So I left it propped up against the open balcony door in my studio, and went downstairs to have something to eat.
Then I listened to a recording of Paul Keens-Douglas wonderful poem ”Sugar George”, in which he tells the story of the life and death of a legendary pan man, 'Despers' steelband  in the background, giving wings to his words with their music, the pans soaring and dipping , singing with joy and sobbing with grief:

Beatin’ the dark with notes so sweet

He close he eye. He breathe he last,

Den dead to hell and gone away. *

I returned to my studio. The blank canvas still blank, but now afternoon shadows were playing on the surface, shadows suggesting form.

The shadows turned into this portrait of a man listening to his inner music, as all real musicians do, always, everywhere.

It came through my hand.

* For the full poem read "When Moon Shine", poems by Paul Keens-Douglas,
or listen to the recording  of "Sugar ​George" on 'You Tube

​
“Comin’ Thru" is about that last stretch on the 'Drag' before going on stage on Panorama night, about the feeling of apprehension, excitement and triumph.  “Comin Thru' ” has the triumphant vibe of a winning band. Maybe because it was painted to tunes that won. Or should have won.
I don’t remember exactly which tunes I had on the loop when I painted it,  but I think All Stars ‘Curry Tabanca’, Despers ‘A-minor’, Fonclaire’s ‘Pan by Storm’ and Renegades’ ‘Guitar Pan’ were all in the mix. The painting evolved out of the music.